All hail the Harrison: A historic apple takes root in central Virginia 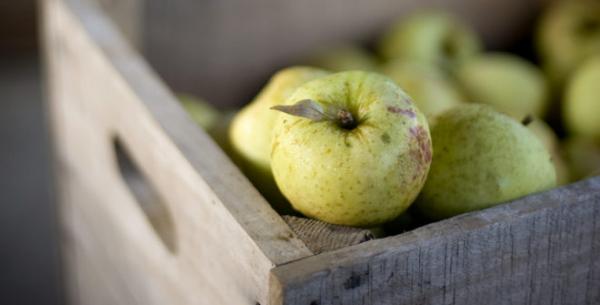 Once upon a time, the apple was king in America. There were thousands of specialized varieties, home orchards were widespread, and cider was the most commonly available beverage. These days, we’re used to a very different reality: Most Americans are familiar only with a handful of commercial apple varieties, bred for shelf life and looks instead of flavor, and cider is more of a niche product than a staple. But local cider makers are reconnecting to that lost era of the apple, and the Harrison—which came within a hair’s breadth of being lost to history—is a key link.

“Anyone interested in fine cider and heritage apples is interested in the Harrison,” says Charlotte Shelton of Albemarle CiderWorks, the orchard and cidery located in North Garden. It’s an apple that earned praises from connoisseurs as early as 1817, when William Coxe, author of an illustrated guide to American apple varieties, called it “the most celebrated of the cider apples of Newark in New Jersey.”

Newark was part of an important apple industry serving the New York and Philadelphia markets, and Coxe went on to note that the Harrison “commanded a high price in New York.” Buyers in those days would have been attuned to the Harrison’s special qualities: “the taste pleasant and sprightly, but rather dry—it produces a high coloured, rich, and sweet cider of great strength.”

Within the century that followed Coxe’s guide, though, the temperance movement and changing American demographics put a damper on what had been a robust apple and cider culture. Prohibition in 1920 was the last nail in the coffin for many of the American apple varieties, and the Harrison—being suited only for cider, not for eating—was among many that were largely forgotten.

Many varieties will never be recovered, a fate nearly suffered by the Harrison. But in 1976, a collector from Vermont went searching for it in the Newark area and, by a stroke of luck, discovered a Harrison apple tree that was less than a week from being cut down by the owner of the backyard where it grew.

Before it fell, the collector took scions (cuttings). Some of these eventually made their way into the hands of Tom Burford—a celebrated central Virginia apple grower, pomologist, and nurseryman who spent decades spreading the gospel of heirloom apples through his books and public appearances. Burford also helped and advised Charlotte Shelton and her siblings from the time they established their business in the 1990s until his death in March.

“One of the things we’re interested in doing is exploring what American apples can produce in terms of cider. The Harrison plays into that hugely,” says Shelton. “Tom was interested in promoting that, and we are his heirs in that regard.”

The Harrison is now being grown around the country and featured as a varietal by several craft cideries. Albemarle CiderWorks, for one, is growing around 150 Harrison trees and makes a single-varietal Harrison cider. According to Chuck Shelton, Charlotte’s brother and the CiderWorks’ cider maker, the Harrison is important not only for its place in history, but because it still makes great cider today.

“My opinion is it’s probably the best cider apple that’s ever been grown in the U.S.,” he says, praising the Harrison’s practical advantages: “It’s a great producer. It’s dense and hard, and stores fairly well so you don’t have to press it right away. A high-sugar apple tends to make a high amount of alcohol from fermenting. That helps preserve the cider.”

All that is a boon to the orchardist, of course, but what about the taste? There too, Shelton says the Harrison earns its keep through a balance of several characteristics. “It’s high in tannins, which give you a slight bitterness and full-bodied mouthfeel,” says Shelton. “It’s very acidic, so it has a very sour taste to go along with the astringency. All these things together make it one of the best.” As for Burford, he may have gone even further when he told Edible Jersey magazine that he was so bowled over by his first taste of the Harrison that he had to sit down.

Come early October or so, the Shelton family will be harvesting this year’s crop of Harrisons: smallish, yellow-skinned, black-spotted apples destined to be pressed, fermented, and eventually poured from tall bottles into waiting glasses. Chuck Shelton says the Harrison is finding its way into more orchards in Virginia and beyond, and that its popularity is a boon to the growing American cider business. “We’re fortunate,” he says, “that it didn’t go completely extinct.”

03/26/2013: Hard Cider: Early America's Drink of Choice
With Good Reason radio show stops by Albemarle Ciderworks to discuss cider's history, and its...
03/26/2013: Terroir and the Colonial Roots of Craft Apple Cider
Great article featuring the family operation here at Albemarle Ciderworks, by Susan Lutz at Zester...
03/26/2013: Hard cider, an old US favorite, makes a comeback
Hard cider, once a staple at the dinner table, has been eclipsed over the years by beer and wine....
03/12/2013: Video Interview at Albemarle Ciderworks
Terri Allard and Charlottesville Inside Out stop by for a chat (and a glass!).Click Here for the...
03/12/2013: "An Apple a Day"
From the Daily Progress 2001, this article is an exploration of the history of the Albemarle Pippin...

02/25/2013: "How 'Bout them Apples" Edible Blue Ridge fall 2011
An excellent in depth article about Tom Burford and his role in preserving heirloom fruit varieties...

Join Sue Harlow at Albemarle CiderWorks for an afternoon of live and local music.