The only cherry that we propagate at this time is the old Black Heart, which is virtually unavailable elsewhere.  Black Heart cherries are a sweet dark fruit on a large tree. Seldom available in the nursery trade, it makes a beautiful specimen tree in the landscape. Because of its size, it is best planted outside your orchard. Descriptions of this cherry are surprisingly hard to come by. Once very common in the landscape, many have been harvested for their excellent lumber.

Downing, in 1845, said Black Heart was then better known than any other cherry in the country. While this statement hardly holds for Black Heart now, it having long since passed its heyday of popularity, it is still, because of the fruitfulness of the tree and the high quality and beauty of the fruit, a variety of much merit. Black Heart fails [as a commercial fruit] nowadays, as compared with the cherry culture of the fruit connoisseurs of a generation ago, because it does not meet market demands, failing to do so through two defects: it does not ship well and when brown-rot is rife it quickly succumbs to this fungus.

This cherry was mentioned by John Rea in 1676 but there can be no doubt but that it originated many years previous to this date. Probably it is the cherry mentioned by Robert Dodonee, a naturalist of Malines, Belgium,in 1552. When or by whom it was introduced to America is not known but it was being grown here very early in the Nineteenth Century and ever since has been considered a valuable variety for general planting. Nearly every nurseryman throughout the United States lists Black Heart, a fact attesting its popularity. The American Pomological Society placed Black Heart on its catalog of fruits in 1862, a place which it has since retained: "Tree large, very vigorous, tall, wide-spreading, productive; branches stout, brownish, mingled with yellow, mottled with gray scarf-skin;... Fruit matures early, season long; large, obtuse-cordate, somewhat compressed; cavity broad; suture deep; surface somewhat irregular; color dark purple becoming black; stem one and three-fourths inches long,  flesh dark red, firm to very firm becoming tender at full maturity, with abundant colored juice, sweet; good in quality."  [From Cherries of New York, U.P Hedrick, 1915]

*Please note: the fruit descriptions on our website are meant to be a repository for information on fruit that we either grow or have grown, but it does not function as a list of tree varieties that will be available for sale from our nursery.  Please see our online catalog for that listing.* 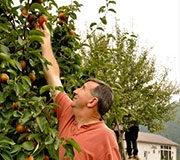 Beginning every November, VVA offers many varieties of apple and fruit trees  for sale. Click here to shop our Tree Catalog for available varieties.