Home > Our Cider > Cider Varieties > Ragged Mountain
Ragged Mountain
With a touch of sweetness, Ragged Mountain is perhaps our most traditional cider. It is an off-dry blend made from Albemarle Pippin, Goldrush, Pink Lady, and Virginia Gold among others. With a simple, fruity nose, this cider has a Champagne feel and a short, crisp finish. Ragged Mountain pairs well with salad courses, cheese plates, spicy and ethnic foods or is easily enjoyed on its own.  8.2% ABV

With a floral nose that belies the crispness of its body, Ragged Mountain is a refreshing cider perfectly suited for pairing with party foods like cheese boards, simple salads, and an array of hors d'oeuvres.  Spicy foods also meld well with the lower acidity of Ragged Mountain, especially those that carry a note of sweetness- pork barbeque, curried chicken salad with currants and apple chunks, or empanadas.  It's also a great "sipping cider" for enjoyment all on its own.

Named for the chain of small mountains southwest of Charlottesville, Virginia, where Albemarle CiderWorks is located, Ragged Mountain highlights the rich diversity of the  apples that flourish here, many of which have been grown for generations in this area. According to legend, Hessian soldiers deserting from the British army during the Revolution hid in these foothills and formed a mysterious, reclusive, self-sufficient and somewhat isolated community.  We chose the name because as well as being our locale,  Edgar Allen Poe wrote a short story "A Tale of the Ragged Mountains" inspired by his brief tenure at the University of Virginia.  This impressionistic atmospheric work evokes the mystery of the place and 2009, the year we opened,  was the 200th anniversary of Poe's birth.
Buy Cider Online 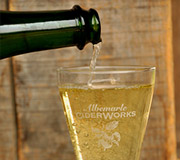